Italy has picked its entries that will compete in the European Union Contest for Young Scientists (Eucys), that will be held next...

Italy has picked its entries that will compete in the European Union Contest for Young Scientists (Eucys), that will be held next September 17-22 at the Expo 2015 World’s Fair in Milan: four projects signed by 9 Italian young scientists will be on display on the 20th of September at the premises of La fabbrica del Vapore in Via Procaccini, Milan. The selection of the Italian contenders was organized by Fast, Federazione delle associazioni scientifiche e tecniche, with a contest named “I giovani e le scienze 2015”, in accordance with the European Commission, Counsel and Parliament.

The first contender will be “BopHIS”, a buoy that monitors coastal water pH; the project was developed by Thomas Alt, Alessandro Roccaforte and Sofia Srebotuyak at the Arturo Malignani Technical High School in the northeastern city of Udine (Stand n.1).

The project consists of an elettronic-IT part and of a “biological” element, for the monitoring an ocean’s health and biodiversity level.

The second contender will be “Metals-Catchers”, which uses the pectin in fruit and vegetable peels to clean up water contaminated with heavy metals; it was developed by Alvaro Maggio from the Quinto Ennio Scientific High School in the town of Gallipoli (Lecce), in the southern Puglia region (Stand n.11).

The project allows also to convert food waste into a resource that can be re-utilized.

The third contender is “iBin”, a “smart” recycling trash can developed by Davide Carboni and Alessandro Carra from Volterra Elia High School in the city of Ancona, in the central Marche region: it is capable of sorting out and separating the different materials and can make recycling easier, especially for the elderly and the disabled (Stand n.23).

The bin is automated and has an audio-video interface; it recognizes the different types of waste through sensors and a microcontroller.

Last but not least, the fourth contender is the project by Fabio Bronzin, Matteo Cividino and Lorenzo Marano of the A. Malignani Technical High School in Udine focusing on improving the quality of plants’ production through the use of a fluorescent tracker (Stand n.3). 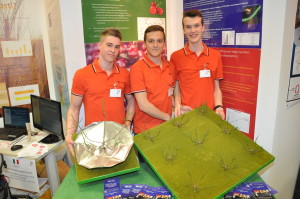 The four finalists were chosen out of 65 projects presented by 143 students from all over Italy by a jury of experts from universities, polytechnics and research institutes. Then they were further selected among 34 finalists that had presented their inventions at the contest held by Fast in Milan.

The EU Contest for Young Scientists

The European Union Contest for Young Scientists is an initiative of the European Commission set up to promote the ideals of cooperation and interchange between young scientists. The Contest is the annual showcase of the best of European student scientific achievement and gives students (aged between 14 and 20) the opportunity to compete with the best of their contemporaries at a European level, to meet others with similar abilities and interests and to be guided by some of the most prominent scientists in Europe. At the Contest, the contestants set up their project in a display stand in the Science Exhibition Hall and are required to answer questions from members of the scientific jury.

Between 1989 and 2014 Italy has won 19 prizes within the European Union Contest for Young Scientists.