Fabiola Gianotti chosen as next head of CERN

Physicsworld.com - The Italian particle physicist Fabiola Gianotti is to become the 16th director-general of the CERN particle-physics laboratory. Gianotti, 52, was selected today at a meeting of... 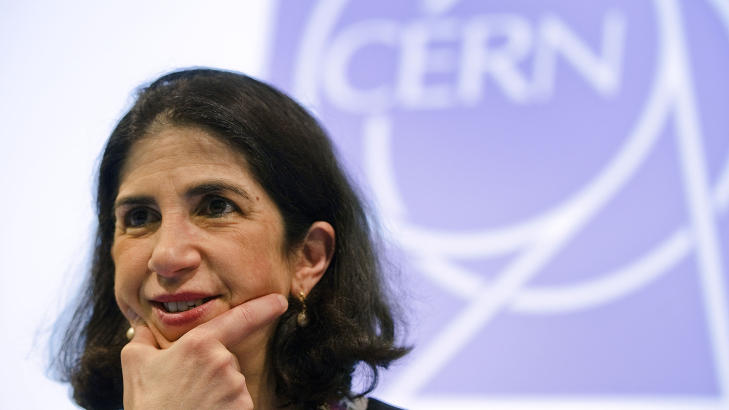 Physicsworld.com – The Italian particle physicist Fabiola Gianotti is to become the 16th director-general of the CERN particle-physics laboratory. Gianotti, 52, was selected today at a meeting of the CERN Council, making her the first woman – and fourth Italian – to hold the position. Gianotti, who will take up the position on 1 January 2016 for a five-year period, says that it will be a “great honour and responsibility” to lead CERN.
Three candidates were shortlisted for the job after being put forward by a search committee, but according to CERN Council president Agnieszka Zalewska it was Gianotti’s “vision for CERN’s future, coupled with her in-depth knowledge of both CERN and the field of experimental particle physics” that led them to pick the Italian. “Fabiola Gianotti is an excellent choice to be my successor, and I am confident that CERN will be in very good hands,” says current CERN boss Rolf-Dieter Heuer, who will step down on 31 December 2015.

Gianotti’s appointment has been welcomed by other physicists too. “I think that Fabiola is an excellent choice,” particle theorist John Ellis from King’s College London and CERN told physicsworld.com. “She is an outstanding scientist and communicator, who has demonstrated her leadership qualities as spokesperson of the ATLAS experiment.” Former CERN director-general Chris Llewellyn Smith, who was head of the lab from 1994 to 1998, says that he is “delighted” by the announcement. “She will do a great job,” he adds.
Gianotti received a PhD in experimental particle physics from the University of Milan in 1989 and then joined CERN, where she became a research physicist in 1994. From 2009 to 2013, she was spokesperson for the ATLAS experiment, during which time she played a key role in the discovery of the Higgs boson. Gianotti was also the public face of the discovery, presenting ATLAS’s results at CERN on 4 July 2012, in what went on to become a historic seminar. The finding led to François Englert and Peter Higgs being awarded the 2013 Nobel Prize for Physics.

As well as being on numerous international advisory boards, Gianotti is also a member of the recently established Scientific Advisory Board of the UN Secretary General. In 2012 she was awarded the honour of the “Grande Ufficiale dell’ordine al merito della Repubblica” by the Italian president Giorgio Napolitano, as well as being a co-recipient of the 2012 Special Fundamental Physics Prize. Last year, Gianotti bagged the 2013 Enrico Fermi Prize of the Italian Physical Society and the 2013 Medal of Honour of the Niels Bohr Institute of Copenhagen.
Indeed, Gianotti’s reputation has gone beyond the confines of particle physics. She was ranked fifth in Time magazine’s 2012 Personality of the Year and was included among the “Top 100 most influential women” by Forbes magazine in 2013. One of her first challenges will be to oversee the restart of the LHC, which is due to come back online next year when it will begin to ramp up to an energy of 13 TeV.