Floating Piers, the walkway on the italian lake

If somebody tells you that you can walk on the water of a lake, you’ll probably think he’s joking, but, in fact, thanks to the... 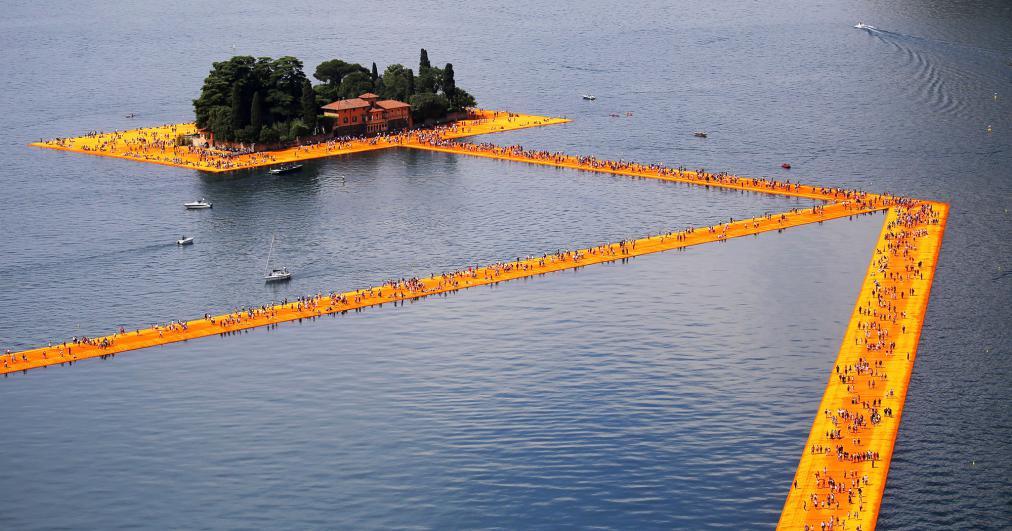 If somebody tells you that you can walk on the water of a lake, you’ll probably think he’s joking, but, in fact, thanks to the The Floating Piers, the last installation of the Bulgarian artist Christo in northern Italy on the Iseo Lake, take a walk to reach an island is now possible.

The original project was initially conceived by Christo and his late wife Jeanne-Claude in 1970. The Floating Piers is a walkway stretching three kilometers, or nearly two miles, that connects two islands in Lake Iseo, in Italy’s Lombardy region, to each other and to the mainland. It’s Christo first outdoor installation since 2005, when he installed 7,500 saffron-paneled gates in Central Park in New York City.

The Floating Piers are assembled from 220,000 high-density polyethylene cubes that form its 16-meter-wide (53 feet) spine, covered with a waterproof and stain-resistant fabric made by a German company for the project.

The Floating Piers have been a massive tourist attraction already in their first week. In the first day, the walkway on the lake has hosted almost 120,000 people, creating a lot of concern both on the organization of the local institutions and on the security system of the installation. Since the opening, on June 18th, more than 450.000 visitors have already took a walk on the lake.

An overwhelming and unexpected flow even for the organizers, who have expected, as the highest peaks, 40 thousand people a day. A peaceful invasion that led to night-time closures and a rethinking of the transport system: at this rate, at the end of the show, on June 3rd, the number will grow to more than one million visitors. Well beyond all expectations.

Christo was born in Bulgaria, escaped to Paris in the Fifties and now lives in New York.

Over the past 50 years he has worked all around the world always in collaboration with his late wife Jeanne-Claude.In his long career he has wrapped, as if in preparation for removal men, a tree in Eindhoven, a fountain in Spoleto, a wall in Rome, the Reichstag in Berlin and the Pont Neuf in Paris. He has encased islands off the coast of Miami in shocking pink, and placed orange banners throughout Central Park in New York.