Fernando Napolitano, CEO Italian Business and Investment Initiative, speaks about the achievements and the results that the organization has reached in three years of activities. "Dear All, At... 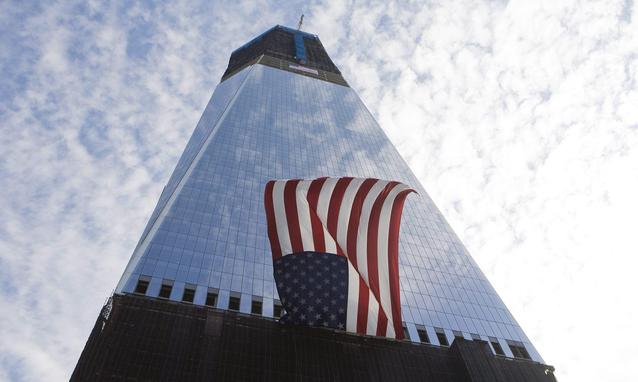 Fernando Napolitano, CEO Italian Business and Investment Initiative, speaks about the achievements and the results that the organization has reached in three years of activities.

At the three-year mark, IB&II has covered a lot a ground.

We will celebrate our latest results next July 9 in Rome at Radio Dimensione Suono headquarters where we will announce the winners of BEST 2014-2015 scholarship, the program for the second half of 2014 in New York in cooperation with VentureOutNewYork and Intesa Sanpaolo Start-Up Initiative and the 2015 Summit that will be moderated by Fareed Zakaria, from CNN, as last February. 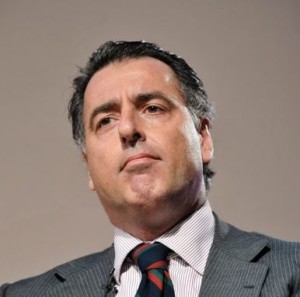 IB&II’s provocative tagline “Why Italy Matters to the World” is becoming less so as U.S. investors realize that Italy has, in fact, embedded strengths to leverage and invest in both in the public listed companies as well as in the small to medium enterprises. These are often overlooked or not known.
Furthermore, the democratic structural transition of its economy is happening. Similar to other transitions – US, UK or Germany -, it will be neither swift nor linear. Pain will, however, characterize it as guilds and vested interests are dismantled and the state withdraws from the economy unleashing energy and business opportunities. Investors will pay attention to such a withdrawal, to the reforms of the public administration, justice, labor market and tax code.

IB&II mission remains, henceforth, valid:
To (re) establish the Italian positioning and reputation within New York business community as a destination for business. This because of the of crisis!

The United States is, and will remain for the foreseeable future, a key market for Italy. Even more so as innovation and technology transfer become key ingredients of Italian companies value proposition, Italy exports yearly US$ 30 billion to the United States. A third of what Germany does!

Results
IB&II established a professional footprint and web of relationships in New York fielding a coherent slate of programs to communicate a different equity story on Italy to investors.
These programs leverage Italian top strengths into an “unicum”: qualified young Italians, start-ups, entrepreneurs, medium companies, and global companies. This initiative is contributing to:
Produce business friendly documents on doing business in Italy (Italy by the numbers)
Introduce Italy as a high-tech country with leaderships in many scientific fields
Anticipate the brain drain allowing young talented Italians to fulfill their dream
Provide Italian corporations, through BEST scholarship and the start up world, with an opportunity to spot innovation for their core businesses
Provide a yearly forum dedicated to Italy in New York to have a direct and accountable relationship with US investor
These programs are in the process of being scaled-up to fulfill IB&II statutory objectives.
In less than a year IB&II gathered an engaged online community that involves about 10.000 people among Facebook fans, Twitter and Linkedin followers.

Since 2011, IB&II has organized and participated to 37 meetings with business leaders and academia including Harvard Business School, NYU and Georgetown University. The 4 programs are articulated as follows:

1st: the BEST scholarship (in cooperation with U.S. Embassy in Italy, U.S.-Italy Fulbright Commission, Invitalia) allows Italian PhDs, engineers and economists, with an innovative high-tech business idea, to:
Spend 2 months at Santa Clara University studying entrepreneurship
Work 5 month for a Silicon Valley start up
Be mentored when repatriated (mandatory to the J1 Visa obligations) for 6 months to launch their own company
Out of 60 winners, 26 start ups have been created In Italy, some joined the second and/or the third program illustrated herein after.
In 2014, supported by Radio Dimensione Suono, there were 200 applicants (up 7 folds vs yearly average). Fulbright U.S.A. has recognized and awarded this program for its vision and results last May in New York.

2nd and 3rd: allow the best Italian start ups invested by an Italian fund and with global ambitions to meet US investors three times a year (one in San Francisco –led by Mind The Bridge– and twice in New York). More than 200 start up from Italy had this opportunity since 2011. To support Italy originated/led ventures, IB&II has directly invested in:
Mind The Seed Fund managed by Mind The Bridge in San Francisco
I Maestri based in New York providing a unique portal for Italian high-end furniture manufacturers addressing U.S. architects’ and interior designers’ segments
ArtistFan based in New York that is revolutionizing the record/music generation industry by providing a state of the art platform for musicians, singers and their fans

The 4th: “Italy Meets the United States of America” summit. Once a year we bring the best from Italy to have an opportunity to interact directly with U.S. investors and opinion makers on the why Italy is an attractive economy. On February 28th 2014 Fareed Zakaria from CNN moderated this event that gathered leading U.S. and Italian CEOs including the VP of the European Commission, Senator Gary Hart and Professor Vali Nasr form John Hopkins University. Aspen Institute Italia, U.S. Italia Council, Invitalia/Destinazione Italia have joined in.

There is a 5th program, to be launched in the fall, that will help the medium Italian companies already operational in the US to increase their sales. 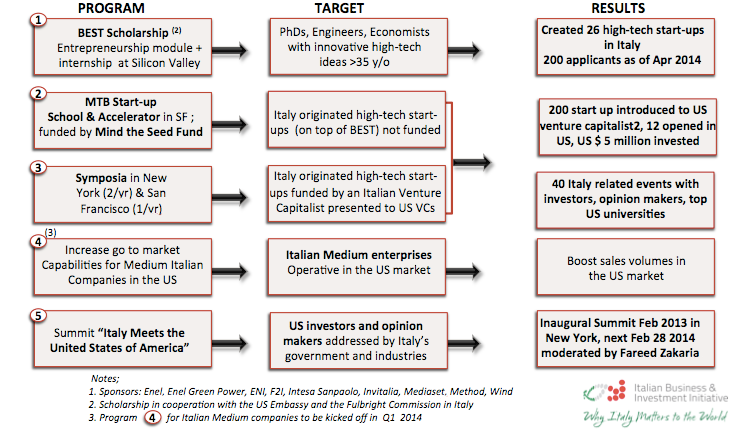