Italy and Usa, a State dinner between friends

A couple days ago the President of the United States Barack Obama and First Lady have welcomed the Italian Prime Minister Matteo Renzi and his... 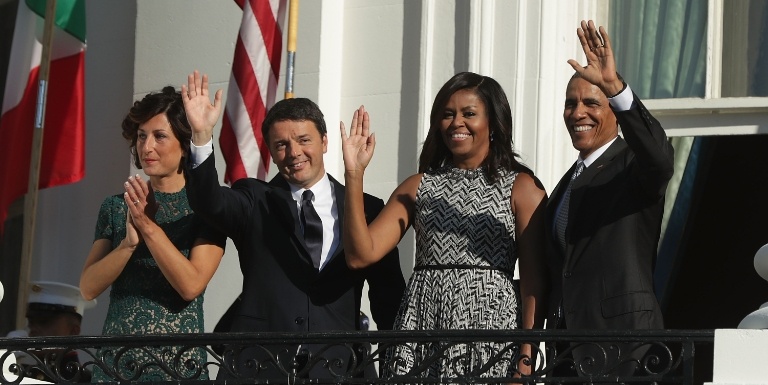 A couple days ago the President of the United States Barack Obama and First Lady have welcomed the Italian Prime Minister Matteo Renzi and his wife, Mrs. Agnese Landini, to the White House for the last Official Visit and State Dinner hosted by President Obama. This event has been an unique occasion for celebrate the long time relationship between Italy and the United States.

A friendship that has started with Columbus

The State dinner has underscored that the bilateral relationship between the two countries is cemented by shared values, invigorated by people-to-people contacts, and enlivened by delicious food (sometimes even a glass of wine). This strong bond is exemplified by the stories and successes of many proud Italian-Americans, stretching all the way back to when Christopher Columbus, a Genoa native, first sighted the New World. As President Obama said during the State dinner: “Tonight, we’re reminded that American democracy has been graced by the touch of Italy,”

The United States and Italy work closely to foster democratic ideals and global security. The President Obama has underlined the Italian leadership in peacekeeping, humanitarian, and military operations around the world in Afghanistan, Iraq, Libya, and counter-ISIL missions. Moreover, under Prime Minister Renzi’s leadership, Italy is at the forefront of the European response to the refugee and migration crisis and leads European Union’s efforts to rescue hundreds of thousands of migrants and asylum seekers while countering human smuggling operations in the Mediterranean.

The Italian Prime Minister , who spoke in front of the White House before the State dinner, has greeted and thanked the President, highlighting how future common goals are based on the same vision of freedom and hope: “Together, we are facing the challenge to give the name to a new era together,” Renzi said, referencing Amerigo Vespucci whose legacy is left in the name of the continent. “My personal opinion is that the name of future has to be freedom. The name of the future has to be education not intolerance, sustainability not distraction, trust not hate, bridges not walls. The name of the future has to be growth not austerity. In the time of fear, we have to give answer with the audacity of hope, not only in the United States.”.

The State dinner has been a great representation of both Italian and Italo-american excellences. In the Prime Minister Renzi’s entourage they were present movie stars like the Academy Award winners Roberto Benigni and Paolo Sorrentino, the famous fashion stylist Giorgio Armani and the Paralympic gold medal Bebe Vio. After the dinner, where were served the delicious plates prepared by the italo-american chef Mario Batali, the famous singer Gwen Stefani has performed for all the guests.