‘Workshop of Precious Stones’ restorers at work in Sansepolcro

ANSA – One of Italy’s oldest art restoration institutions will spend 18 months breathing new life into Piero della Francesca’s dazzling Renaissance fresco The Resurrection.
Art connoisseurs as well as tourists to the Tuscan town will be able to see for themselves how the work is progressing, thanks to a special scaffolding bridge that has been erected. 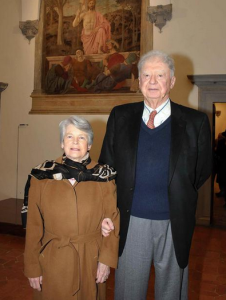 The work has been sponsored by private Milanese collector Aldo Osti, say local officials. Restoration is being carried out by a team dispatched to Sansepolcro from the Opificio delle Pietre Dure or Workshop of Precious Stones, one of the world’s leading institutions in the field.
It has been based in Florence since the 16th century.
Recent high-tech scientific tests by the Opificio envoys showed that a cleaning and restoration of the canvas was urgently needed and although Sansepolcro’s town council earmarked 40,000 euros for the work, Osti has reportedly pledged as much as 100,000 euros more. Cecilia Frosinini of the Opificio said the restoration will be a delicate challenge. “The painting was carried out with a mixed technique, in part fresco … and with different drawing methods,” she said.
“The palette of pigments is characteristic of Piero (della Francesca) tempera paint such as cinnabar red lacquer, malachite and white lead,” she added.
Frosinini said the restorers may also resolve a mystery over the original site of the fresco which is now a pillar of the Sansepolcro civic museum. “There are doubts over whether it has always been in this building,” she said.
Osti, a former Buitoni executive from Sansepolcro, said the work by Piero, also a native son, means a great deal to the community.

“This is a symbolic work, representing our town with the guards who sleep and Jesus Christ who is resurrected amid indifference – looking at us and exhorting us to do better,” said Osti.
Agostino Bureca, cultural superintendent for Arezzo province, said it is necessary to secure and stabilize the structure on which the fresco is painted, given that the building has been damaged repeatedly by earthquakes since its 15th-century creation.
“It is important to conserve not just the masterpieces but also to make the context secure,” said Bureca.
“That is why we have made an agreement with the engineering faculty of the University of Perugia for a further inspection and study of stability”.
A British art lover helped to save the entire town from bombing during the Second World War in order to ensure the safety of the brilliant fresco, and thus the community owes its life to the Renaissance painter, said Sansepolcro Mayor Daniela Frullani.
“Piero already saved Sansepolcro from a bombardment in the Second World War when the English Captain Anthony Clarke refused to destroy it because he was in love with Piero della Francesca’s work,” she said. “Now we need to restore the beauty to a work that is by definition, beautiful”.