Temple of Peace to be restored for Rome’s birthday

ANSA - The Temple Peace, one of the lesser known structures of Rome's Imperial Fora, is set to rise again in time for... 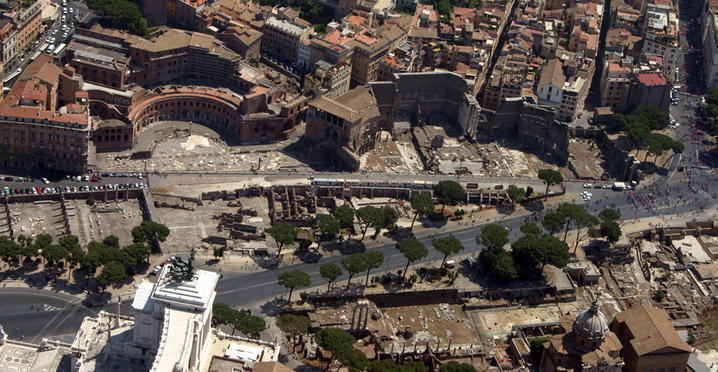 ANSA – The Temple Peace, one of the lesser known structures of Rome’s Imperial Fora, is set to rise again in time for the city’s birthday commemoration, a cultural heritage official said Thursday.

With reconstruction work set to begin in early March, five columns missing from what remains of the temple built by Emperor Vespasian in about 75 AD will be reconstructed by April 21, Rome’s birthday, said the municipal Superintendent of Cultural Heritage Claudio Parisi Presicce. “The goal is to replace the five marble columns of the Egyptian portico that surrounded the temple, where they were at the time of Vespasian,” he said.

What remains of the Temple of Peace, sometimes known as the Forum of Peace, now rests in the present Roman Forum near Largo Corrado Ricci.
One of its original walls has been incorporated into the Church of Saints Cosmas and Damian in the Roman Forum, where holes can stil be seen that were once used to affix a marble map of ancient Rome that dated from the third century AD.

The restoration work will help to shed light on another element of Rome’s history for visitors. “Of the five Imperial Fora…it is the least known because unfortunately, most of the remains are underground but…we plan to expand the excavations of the visible surface,” said Parisi Presicce.

“The goal is to resurrect this forum which is currently not known by citizens, reassembling the five Egyptian marble columns of the quadrangle surrounding the temple, where they were at the time of Vespasian,” he added.

The plan is to include the restored Temple of Peace in large-scale illuminations of the Imperial Fora on the night of April 21.  According to tradition, that is the date when Rome was founded in 753 BC by some accounts. Parisi Presicce said that large fragments of the Egyptian marble colonnade have been studied and recomposed for the restoration project using “very sophisticated technical work” that takes account of seismic issues. The danger of earthquake is ever present up and down the Italian peninsula. Two sections of the original quadrangle that surrounded the Temple of Peace are still in place, he said.

Parisi Presicce said that excavation of the area dates back to the 1930s. That’s when the Fascist administration of Mussolini constructed the modern Via Fori Imperiali that cut through the Imperial Fora, leaving the fora of Augustus, Nerva and Trajan on one side, with the Forum of Caesar and the Roman Forum on the other. It is believed the Vespasian began work on the Temple of Peace after the capture of Jerusalem in AD 71. It may have included treasures looted from the Temple in Jerusalem.