The Battle of Oranges: an Italian Carnival tradition

Have you ever heard of an Italian city Ivrea? Might be you haven’t, but Carnival is a right moment to visit it! This tiny town... 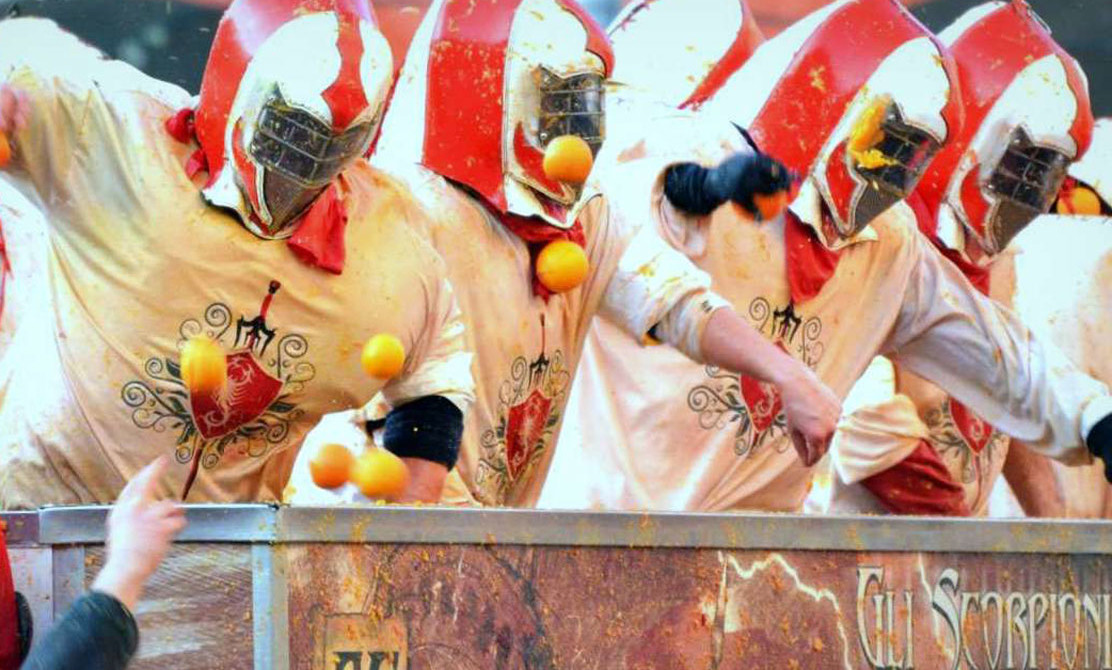 Have you ever heard of an Italian city Ivrea? Might be you haven’t, but Carnival is a right moment to visit it! This tiny town in the Piedmont region, close to Turin, is famous for the Battle of Oranges organized every year during the Italian Carnival days.

The origins of the Carnival tradition

The legend tells that in the Middle Ages the oppressed citizens threw stones and pitchforks at their lord’s palace and that’s where the tradition of throwing the oranges at each other comes from.

Associated to the past battles, today the Battle of Oranges is a colourful annual festival hel in Ivrea every Sunday, Monday and Tuesday during the Carnival. The festival is popular both among the tourists and the local citizens: every year it counts more than 20000 participants who have lots of fun throwing tons of orange citrus fruits at each other.

According to the old tradition, the Carnival commemorates the 12-th century defiance against a tyrant that the Ivrea citizens have survived. The legend tells that a young lady, a daughter of a local miller, has killed the evil lord who tried to bed her on her wedding day (back in those days the lord had this kind of right). Actually there is a young lady that is chosen every year to pay a role of Violetta – the brave girl who killed the tyrant.

In the 19th century after the Napoleon’s occupation the Battle of Oranges has gained also an anti-French touch.

It’s interesting to mention that oranges actually are not a typical fruit of the Piedmont region: Ivrea is located in the North of Italy while the oranges come from the South. In fact every year about 30 tons of oranges are shipped to Ivrea from Sicily. Who knows why exactly this fruit was chosen for the Battle of Oranges during the Carnival? This might be a topic for another story!