Is well know that Italians are a very passionate people, but the viral video that is running in every website in these weeks goes well... 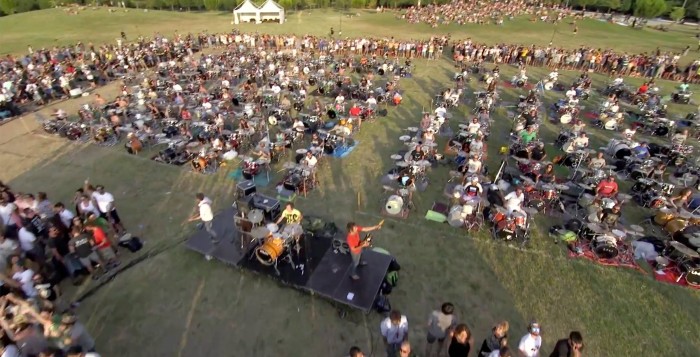 Is well know that Italians are a very passionate people, but the viral video that is running in every website in these weeks goes well over the idea of passion. The desire of something is a pretty simple thing, doing something for what you desire is great but put together 1.000 people with the same wish and make them play as an orchestra is something amazing.

An Italian man had a “crazy” plan, having 1,000 Foo Fighters’s italian fans playing a synchronized rendition of the hit Learn to Fly, in order to persuade the Foo Fighters to play in Cesena, his own town. Fabio Zaffagnini, the organizer behind everything, devised the plan in May 2014 and launched a crowdfunding campaign later that year. In seven months, the campaign collected €44,788 ($49,100), according to Italy’s ANSA news agency.

Organizers sorted through thousands of videos to determine who would make the final cut of 350 guitarists, 250 singers, 250 drummers and 150 bassists. The video went immediately viral and The Rockin’ 1000 project has collected more than 11.5m views since it was posted on YouTube on Thursday. It is described on the site as “a miracle that will not be repeated ever again in music history”.

As you can see in the video down below the 1000 were directed as a true orchestra, at the helm of the performance was composer Marco Sabiu, who has worked with Ennio Morricone, Luciano Pavarotti and Kylie Minogue.

The Response Of David Grohl

As said, the video’s impact on the web and on the social media has been massive and all the Foo Fighters’s fans around the world love it and endorse the dream of the 1000 Italians rocker. The answer of the front man of the American band, David Grohl, former Nirvana drummer, was not long to wait. In a video, down below, originally posted on the Foo Fighters’ YouTube channel, Grohl, talking in Italian, thanks all the fans. “We’re coming, I swear,” Grohl said. “We’ll see each other soon.” Grohl did not commit to a date for Foo Fighters’ Cesena show, though the band has two dates scheduled in Italy in November.