Top Ten Things You must see at EXPO 2015

After three months from it’s opening the Expo 2015 Milan has reached almost 9 million visitors. The global event hosted people from all around the... 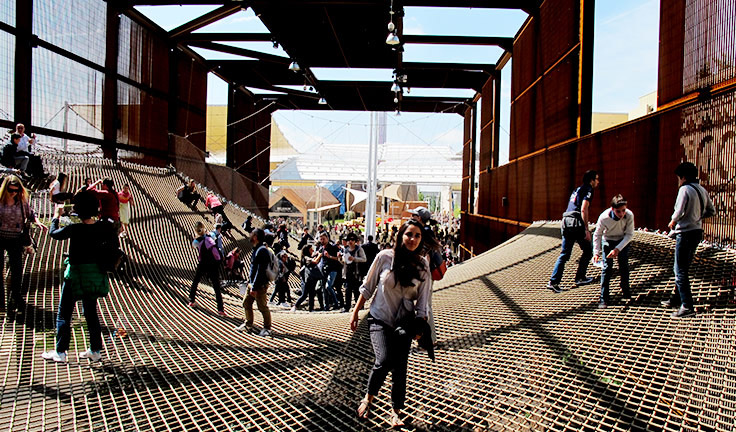 After three months from it’s opening the Expo 2015 Milan has reached almost 9 million visitors. The global event hosted people from all around the world, not to mention the many Prime Ministers, Presidents, First ladies and personality from the business and the financial sector.

If you choose to visit the Expo fair, there are a lot of thing to do and to see of course but if you want to save a little bit of time the website Swide.com gives you a Top Ten of thing you must see.

1) A NET SUSPENDED OVER BRAZIL

This is Expo’s number one attraction. Visitors are able to walk on the suspended part of an interactive net connects the three floors of the Brazil pavilion, and they can change the volume, the sounds and the lights around them using sensors that detect movements by transferring pulses. Under the net is a green gallery with vegetables, plants, flowers and fruits accompanied by interactive tables.

2) SAVE FOR THE NEXT – SWITZERLAND 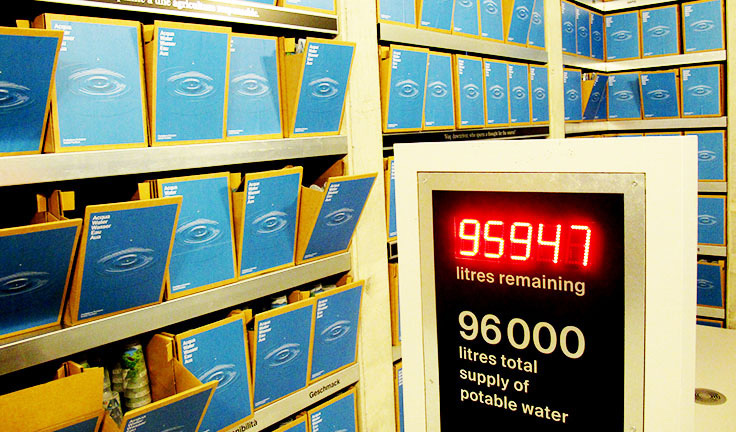 The presence of four towers make the Swiss pavilion the most engaging on the theme of sustainability. Visitors can access four towers full of water, salt, coffee and apples by elevators and, once at the top, they can help themselves to as much as they want, treating it as a huge free supermarket. But the message is clear: the resources are limited and Expo lasts six months. If we all take some, what will be left for those who come after? The design aspect is particularly interesting: as the towers are emptied, the platforms on which they rest are lowered, changing the appearance of the pavilion itself, drawing a parallel with the planet and its scarce resources. 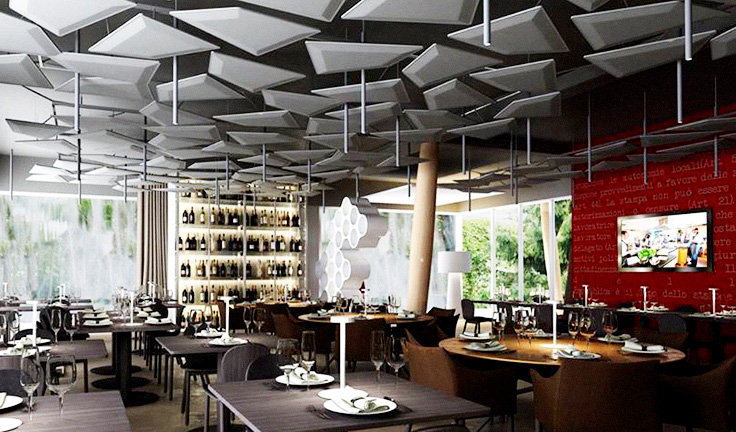 With the opening entrusted to triple Michelin starred chef and ‘made in Italy’ icon Massimo Bottura, haute cuisine takes centre stage at Expo 2015 thanks to Identità Expo, an event partnered by Identità Golose and S.Pellegrino. For six months top Italian and international chefs will arrive in Milan to cook a special menu created for this unique temporary restaurant. All you need to do is consult the online calendar to discover the 200 cooks participating in more than 450 events. 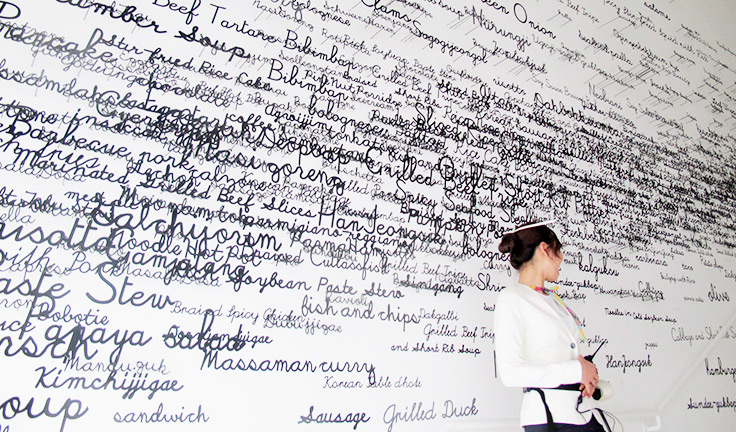 The structure is inspired by the “onggi”, the typical ceramic vessel in which some traditional foods are fermented, while at the entrance you are greeted by a wall with all the words relating to food. Inside, a room demonstrates the preparation of Hansik, a name that not only encompasses Korean food, but a whole way of eating based on balance and on dishes complemented with vegetables and fermented cereal species, a preservation technique that inspired the entire Korean eating tradition. The robotics installation is very impressive. 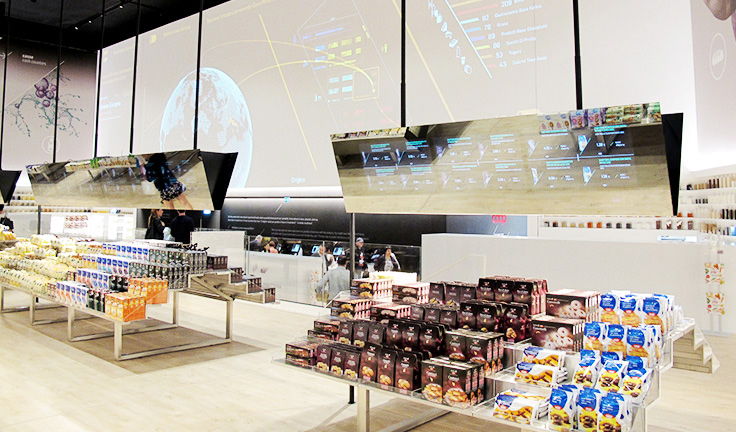 The Italian supermarket  company “Coop” presents the supermarket of the future. Price tags are no more, and instead there are large flat screens located above the product displays. Just wave your hand over the desired product and all the details about its nutritional characteristics, origin and price will appear on the display. A robot by ABB will pack apples for you, and if you have a recipe you want to use just send it to the shelves via the wireless app so that you don’t forget anything. In case you need your shopping shipped worldwide, DHL is waiting for you after the automatic checkout.

6) PAST AND FUTURE IN JAPAN

The Japan Pavilion consists of 17,000 pieces of wood stuck together in a way that lets in the natural sunlight. It houses a “food court” for visitors to experience Japanese tradition with seven restaurants, including chains created at the beginning of the twentieth century such as Kyotaru for sushi, or those from the late nineteenth century, such as Ningyocho Imahan for beef, not forgetting Sagami for udon. The real attraction is the “Future restaurant,” however, a restaurant with ten tables that serves a virtual lunch: every dish appears on the table with an explanation of the recipe and its nutritional properties.

7) A RAINFOREST IN MALAYSIA 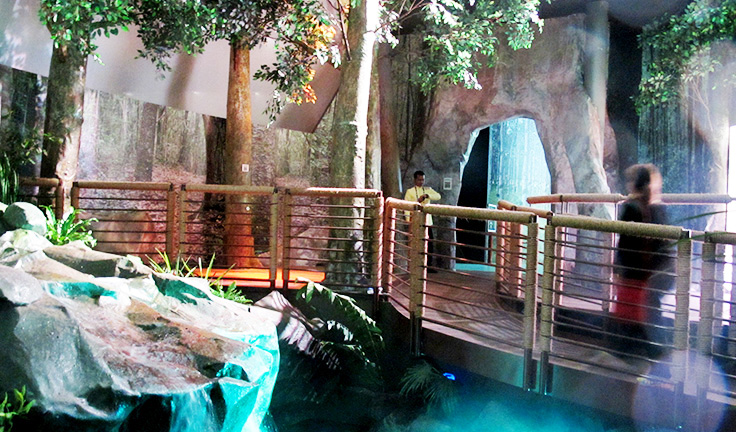 The Malaysia pavilion is shaped like four seeds, and its external structure is built with “Glulam” or laminated wood, an innovative structural wood made from sustainable local material. In the first seed, a video projected on the walls takes visitors “inside” the beauty of Malaysia, while as soon as they open the door to the second seed they find themselves in the reconstruction of a rainforest. The space dedicated to Malay music, art and culture is rounded off with a courtyard offering exquisite take away desserts. 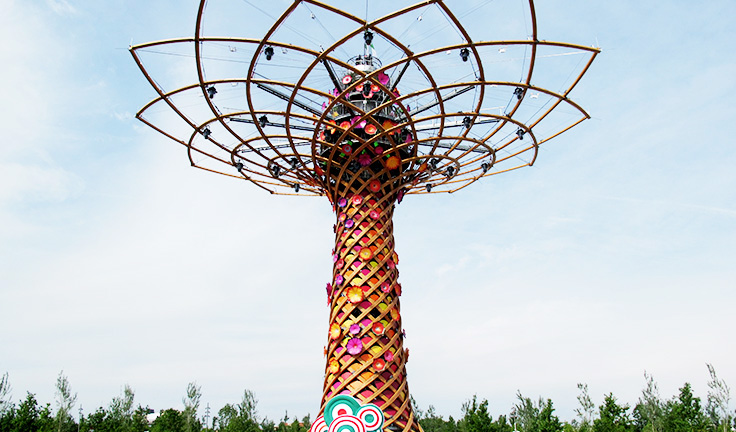 The concept plan for the Expo 2015 exhibition site led by Stefano Boeri, Jacques Herzog and Ricky Burdett is based on the idea of ​​tracing two demarcation lines within the area to create two avenues, one primary and one secondary. The layout refers back to the ancient Roman model of the cardus and the decumanus, and is covered by large sheets that protect against the heat and sun, evoking the idea of ​​a global market and giving a sense of lightness and airiness to the structure. To the south is the Open Air Theatre, which spans about 10,000 m² with a total of about 9,000 seats, while to the north of the cardus is Palazzo Italia, which overlooks Lake Arena with the vast “Tree of Life” installation. During the day it comes to life to notes sung by the cherished voice of Pavarotti, and at night it lights up to stage a fabulous spectacle

9) EATALY and THE RESTAURANTS OF THE ITALIAN REGIONS 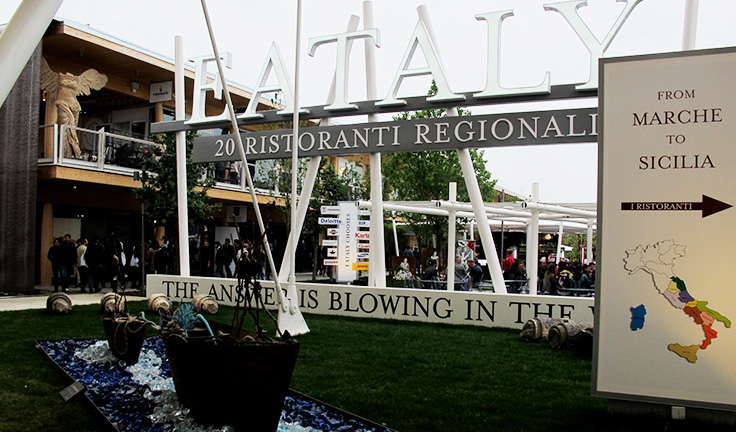 The nicest space for relaxing and trying out multifaceted and satisfying Italian cuisine regional has to be Eataly. Not a pavilion as such, it is rather two restaurants with 12 regional hosts that change every month. The structure encloses a lovely garden with outdoor seating, the only space with comfortable tables and kiosks for drinks on the grass in the open air. We can already tell that it will be mobbed with spritz drinkers at aperitif time, but you shouldn’t miss the many regional specialties such as gnocchi with anchovy by Pasquale Torrente from Campania, the trofie al pesto by “O Magazin” from Liguria, the fresh pasta with “ragù di cinta” by Trattoria da Burde from Tuscany, and Michelin starred dishes starry by Vivina Varese’s Alice bistro in Lombardy. With 80 new dishes each month you’ll be spoiled for choice! 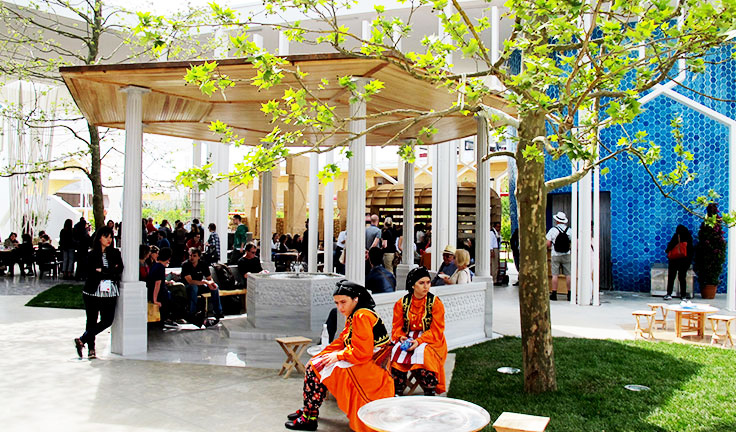 The Turkey Pavilion offers a charming and relaxing nook. A path first leads you through a series of spice and flower markets to an enchanting installation dedicated to seeds and the offer for the planet’s near future. After this, a bar space opens up where you can enjoy a Turkish style coffee or tea combined with typical baklava pastries, while enjoying a break in the airy cloister under the plane trees, accompanied by traditional music and dance performances.

In ad of this top ten list, there is a n.11 for all the family but maybe mostly for the parents 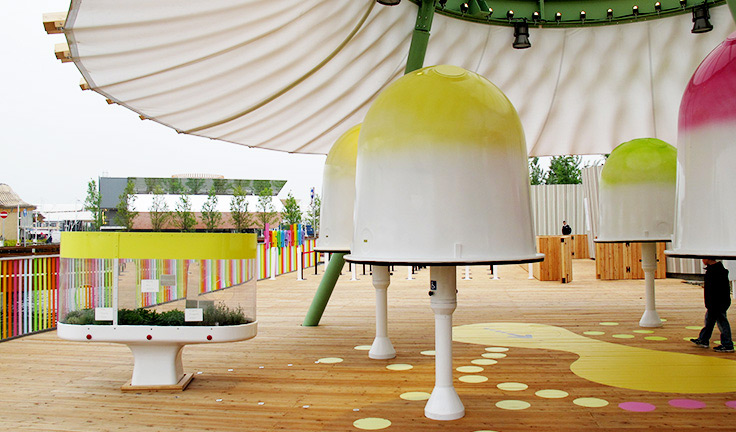 You will want to revert to childhood again just to be able to explore the theme of nature and “feed the planet” through the many interactive and playful attractions. Curated by Sabina Cantarelli and developed by the Reggio Children team, Children Park is a play area with a series of experiences, activities and moments of relaxation. There are bell jars for kids to discover the smells of herbs, a vertical garden with strawberries grown by collecting water, interactive screens that turn into trees, bicycles that produce music when pedalled and water fountains.