United we stand, divided we fall. The famed ancient motto is at the heart of the Tuscan association of premium wines, formed with the name...

United we stand, divided we fall. The famed ancient motto is at the heart of the Tuscan association of premium wines, formed with the name Avito (Associazione Vini Toscana DOP e IGP), that, for the first time, brings together the majority of Tuscan wine makers of Protected Designation of Origin and Protected Geographic Indication wines. Old local feuds must be set aside because they weigh on much-needed international expansion and hinder the further growth of the business, including the ability to advocate Tuscany’s winemakers needs and count more in distant markets as well with institutions.

The association brings together 16 consortia, from the most famous and renowned like Chianti, Chianti Classico, Brunello di Montalcino, Nobile di Montepulciano, San Gimignano, Bolgheri, to smaller ones such as Valdarno di Sopra and Orcia, representing a total of about 5,000 companies and 70% of Tuscan wine production, with a turnover of around 1 billion Euro (over 70% of which generated by exports). In the coming weeks, with the expected entry of the remaining consortia of Tuscan wines (including IGT Toscana and Carmignano), the group (already dubbed the “consortium of consortia”) should represent more than 90% of Tuscan wine production.

A huge opportunity for Tuscan wine

“This is a huge opportunity for the whole Tuscan wine industry”, said Giovanni Busi, President of the Consortium of Chianti, the most important in Tuscany, “the first step toward a shared promotion of our business that can give new strength to a product that needs common initiatives to be promoted abroad. Internal fragmentation won’t help”. 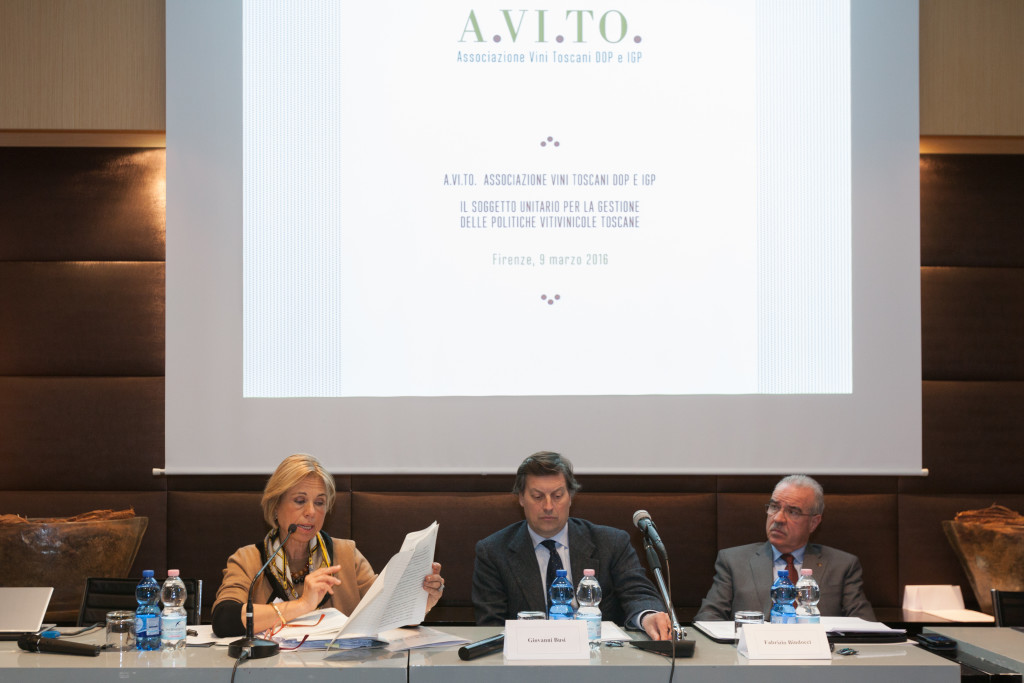 “The new super-consortium shows that even in Tuscany you can work as a team,” said Fabrizio Bindocci, president of the Brunello di Montalcino and the first president of Avito. Vice President is Luca Sanjust from Doc Valdarno di Sopra but within Avito all consortia have their say; in fact, the bigger ones will help the smallest develop and the president and vice president will change every two years so all consortia are equally represented. Working as a team is a ground-breaking approach, according to Bindocci, “a new way to do culture and promotion in Italy”.

As a matter of fact, this super-consortium stems from acknowledging that only by “speaking with one voice” Tuscan wine producers can grow their business and expand successfully into new markets, especially the emerging ones like China. “If we compete as a single system, we have better chances on the markets”, said Sergio Zingarelli, President of the Consorzium Vino Chianti Classico.
On Avito’s “to do” list will also be a proposal for a new event to be organized in Florence, which could be destined to host the wine previews organized today by several consortia on their own, or create a brand new trade fair based on the example of Vinitaly.